“Can we go back to Luang Prabang?” Lala asked after I felt her firm tug. I saw a need of escape from her eyes. “I miss their calmness” she added.

I skimmed the area as if I still need evidence that we are in Chiang Mai. We were there trying to keep our hands together as we walk through the long road of Rachadaemneon. “Be mindful and stay close” I replied.

Rachadaemneon Road is known as the Sunday Walking Night Market in Chiang Mai. As much as I too wanted to go back to Luang Prabang, being in Chiang Mai on a Sunday evening is a stroke of luck. I always love the crowd in a market. Their combination always exhausts a pure flavor of culture. I wasn’t ready to leave Luang Prabang then but as soon as I stepped in Rachadaemneon Road, I can’t neglect the excitement I was feeling.

The volume of foreigners was hefty.  Westerners and Asians were both slowly walking and intensely haggling. Local stores were in full mode of selling. And although I was skeptical on buying in Thailand because I have always believe that touristy cities are expensive, the local stores here are half way cheaper in Laos. 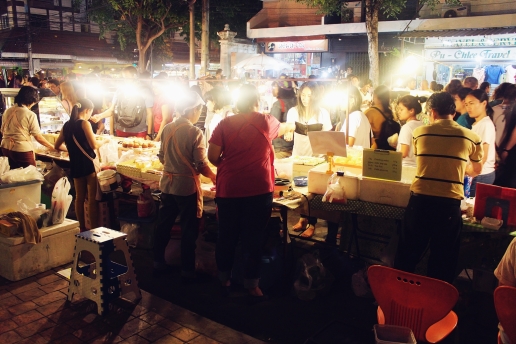 A guitarist occupied the intersection of Rachadaemneon Road & Prapokkloa Road as if it was reserved as his performing stage (was it?). The sun was about to set and so the whole night market was getting ready for a long busy trading. The guitarist went on & on with his songs giving the perfect vibe for everyone while I stood watching & appreciating his boldness.

I stepped back from his growing audience and looked around my surroundings but I still didn’t find Ate Jenny. We only just spent a couple of hours in Chiang Mai and one of us was already no where to be found.

And so we continued our stroll.

We went into a temple with name I failed to know until today (thanks, Google!). The surrounding of Wat Chedlin was dark giving a pleasant chance for its colorful lanterns to glow and guide our way into its entrance door.  We were welcomed by hundreds of paper strips printed with gold embellishment hanging from the ceiling. People sat on the hallway praying before a huge Buddha & in the midst of peering people (including me) taking photos of temple pillars & coin bowls.

Our stroll ended not finding Ate Jenny but a cellphone sitting alone on a yellow chair. I & Lala looked around to find someone who can keep the phone safe.

We found a group of event organizers sitting under a blue tent beside now a blocked street in Prapokkloa Road. “We saw this phone on one of those chairs. Maybe you should keep it?”  I said. Surprised and clueless as to why we were talking in English despite our similar faces, they took the phone and said thank you with smile.

“No problem” we replied.

“Where are you from?” they quickly continued.

“We’re from Philippines” I answered.

“Wow. That’s a very kind act from Filipinos. Thank you very much” they responded looking at us intently.

We waved our goodbye with smiles and happiness because at that moment, we realized Chiang Mai just welcomed us in its nosey noise frills.