Let me continue telling our wandering stories we had in Japan last year. 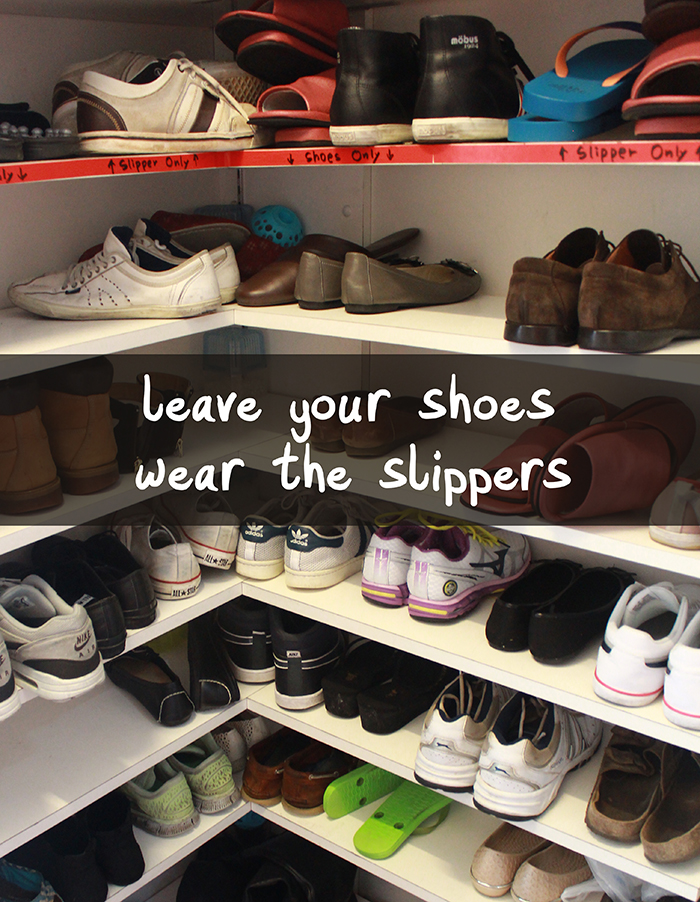 Make sure, though, to also watch the travel video here. Just spare me for some mistakes I have made. Hihi.

Japan is amazing in a new way!

Nearly all subway stations in Tokyo have braille board beside every ticket machine. Braille is a reading and writing system used by the blind and visually impaired people. One can know how much would a ticket cost from point A to point B and navigate even the ticket machine to know where exactly the coins should be dropped in or bills should be inserted. Aside from being awesome for having also an option to use English language in the ticket machines for able people and braille for blind people, these ticket machines can also read out the words for deaf people. Handicap people can also navigate themselves in and out of the stations by following the yellow rubber guide strips on the flooring throughout the subway network. Amazing and Awesome, right? 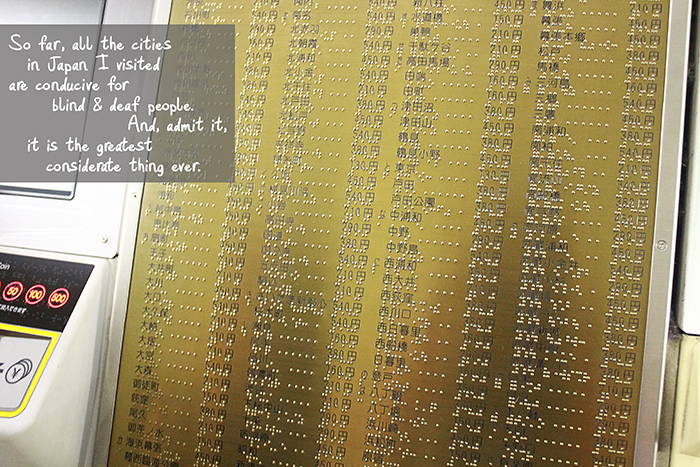 Asakusa Shrine must be the most touristy shrine I have ever been. It was totally crowded. There were many stores selling food, noodles, drinks, bags, origami, bookmarks, shirts, accessories, masks, figurines and…name it! So imagine the crowd buzzing within the long lines of stores combined with the people visiting the shrine to say their prayers. 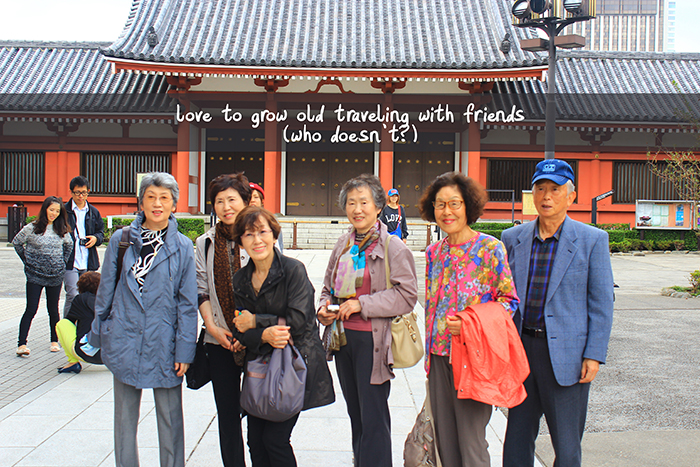 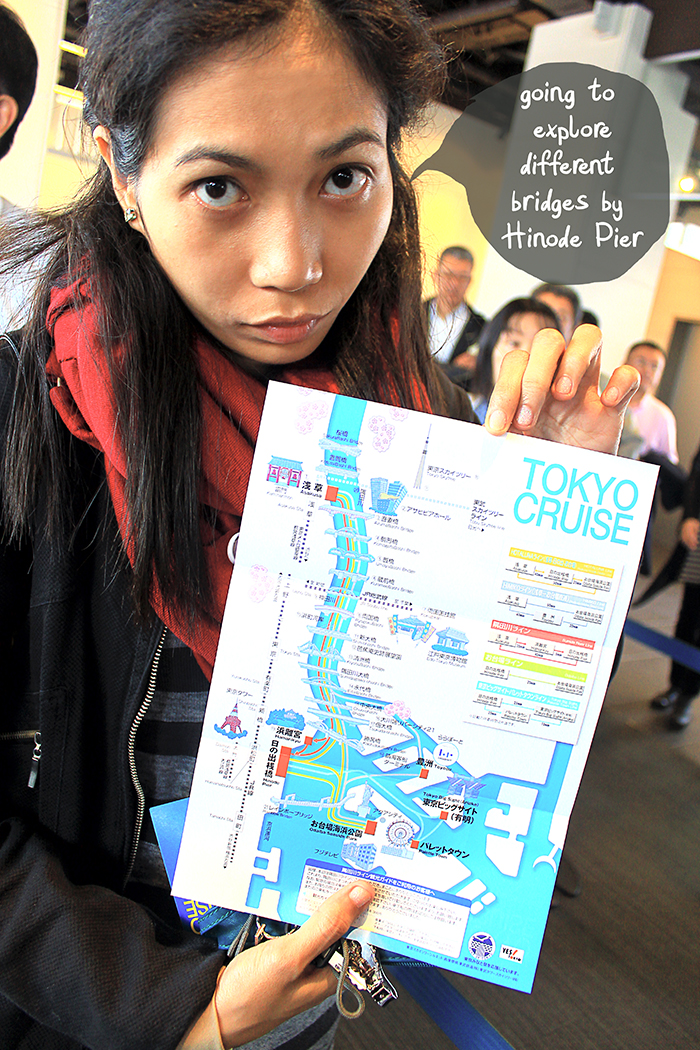 Good thing is Tokyo has really a lot to offer. We went to Tokyo Cruise near Asakusa Shrine to ride the Hinode Pier going to Odaiba. Experiencing Tokyo Cruise is like having a field trip of bridges. Each of the passengers received a map with the details of the different bridges and the trip route. Riding the cruise gave us the glorious front and underneath views of the bridges. It was not all bridges, though. We enjoyed viewing the different landscapes of buildings surrounding the river like the one below. 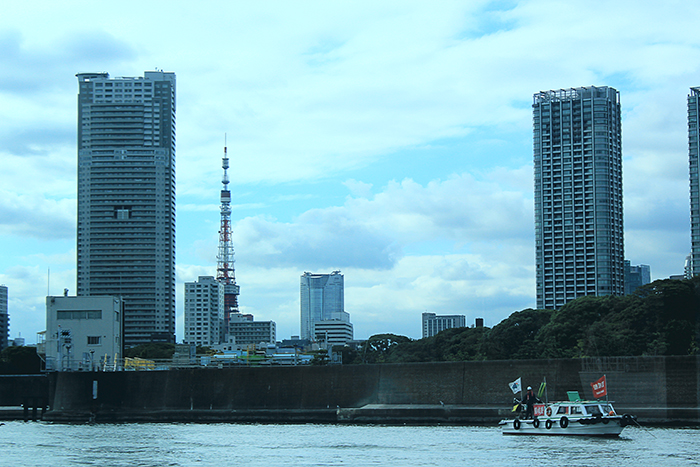 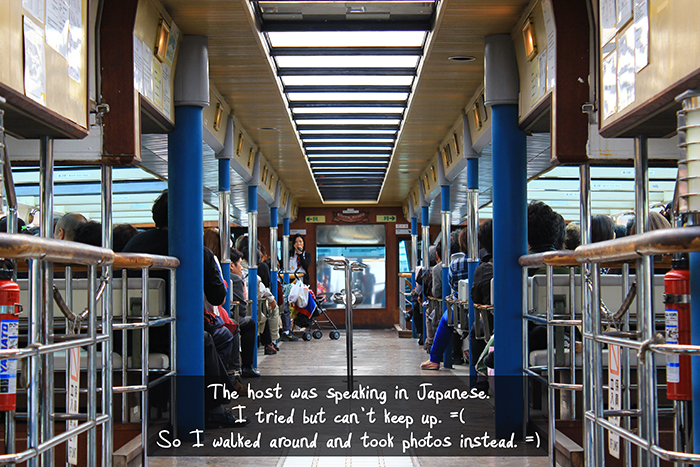 We head off to Shibuya later in the afternoon. We had to cross the Shibuya famous pedestrian. The intersection of the pedestrians is very famous because of the exchange of huge crowds from different side streets outside the Shibuya station. It is a favorite spot for movies and dramas for scenes of crowds or if a character need to run furiously. Sunao ni Narenakute is a japanese series with a setting in Shibuya and the intersection is the first location featured. (I highly recommend this series for people who loves relationship themes haha) 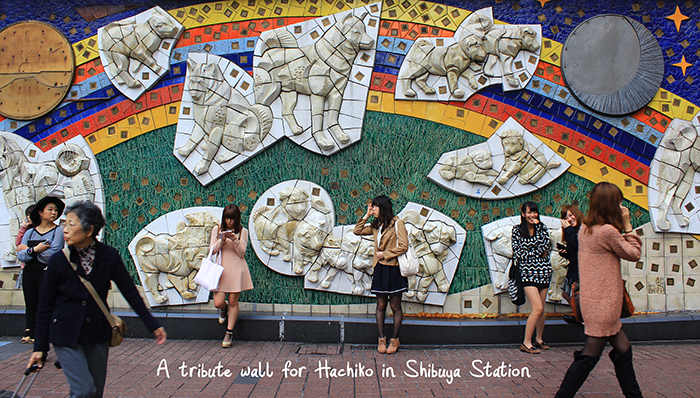 We also met the loyal dog named Hachiko. Hachiko became famous for his closeness with his master. There are Japanese and American movies that portrayed the loyalty of Hachiko to his master even after death. (Oops. Didn’t mean to write the ending!)

Shibuya station was very crowded and part of the station was a little dirty for what you would usually see in Japan. There were many young people. If you want to see the monument of Hachiko, you should ask the customer service of the subway station once you hop off the train because the subway exits are confusing and the monument is covered by the young crowd. 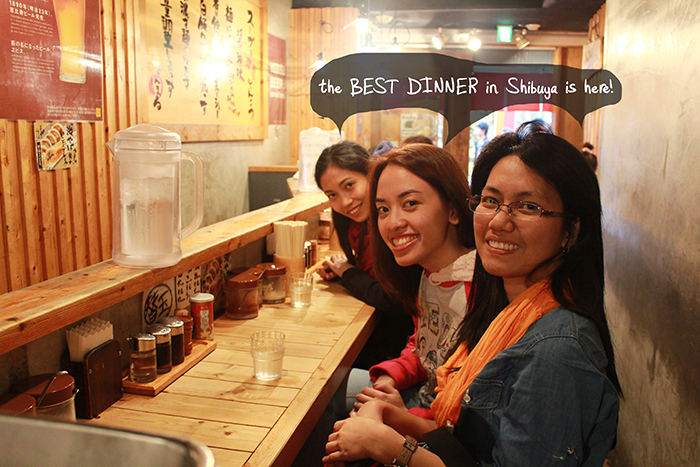 We had a dinner in a small restaurant somewhere in Shibuya. It was the best dinner I had in Japan. I have yet to experience the meal that would be better than what we had then. We chose our meals and paid in a vending machine placed at the entrance. We only bought 2 meals and gyoza because we already knew some food tricks about Japanese meals, for example, a meal is usually “too much for one person but too little for two persons”. Haha. 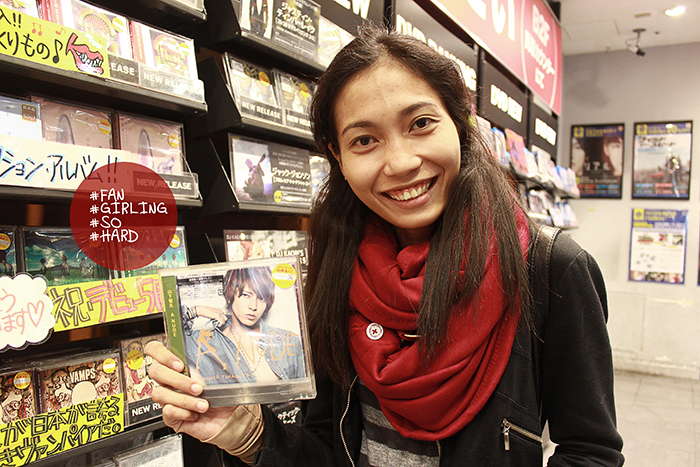 We also went inside a manga and magazines store. It was a big store! And I found something that I already expected to see in Japan but still shocked me. There was a section in the store that was full of manga and magazines of “Rated XXX” illustrations and stories. There were a bunch of guys reading intently and focused on the sides of the shelves. Man, I didn’t expect the huge piles of books and focused guys together so I was like “Ehhhk!?!”. I learned before that pornography in Japan is a normal thing and that the country has its own pornography industry selling to a wide market like how other industries sell consumer goods. But wait, don’t stereotype or judge or whatever the Japanese people.  I am just telling you what I saw and learned. 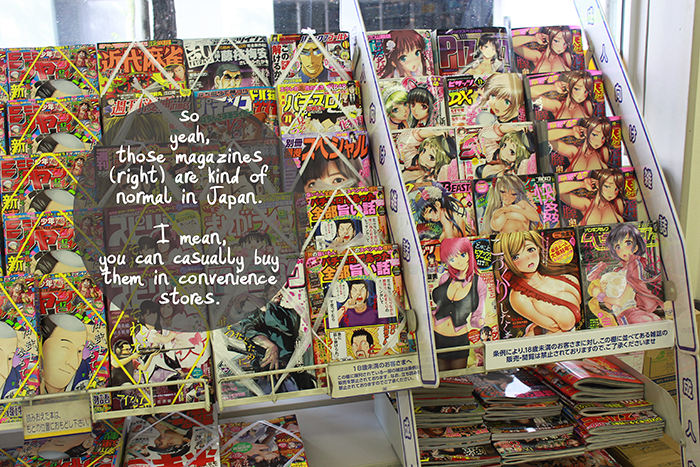 After Shibuya, we went to Harajuku at around 830pm. Almost all the stores were already closed. We thought of just taking the moment of traveling slowly so we looked for a coffee shop where we can spend some time. We can’t decide among the many coffee shops so we ended up in a Starbucks somewhere inside some street. Nice experience for choosing Starbucks for a first timer in Japan. Haha. 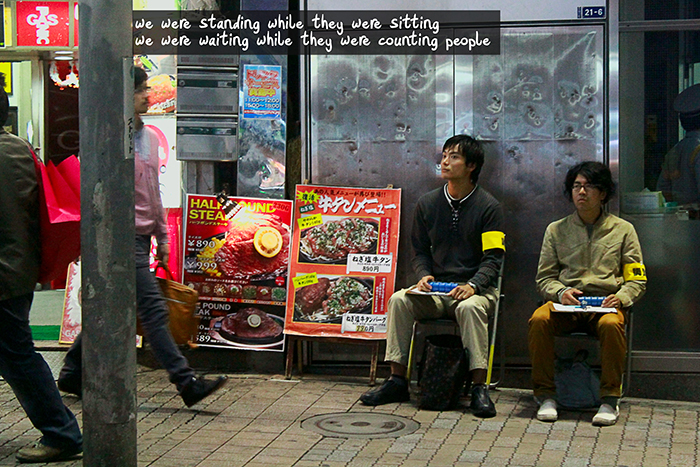 Our flight to Osaka was 6am next day. We had to get our luggages from Khaosan Tokyo Ninja and head to Narita Airport before the Tokyo station close. We looked for the Harajuku station but got lost. We can’t find it after an hour or so of endless searching. Oh my. We approached a foreigner guy then he taught us how to get back to the station. When we arrived in the station, we suspected that we may have been just circling the station. Haha!

After we took our things from the hostel, we rode the 12am last trip of train going to Tokyo Station. Then we lost our way again in Tokyo Station because all the exits of the station are already closed and we can’t find the bus terminal for Narita Airport. Haha. We also met two lost ladies looking for the bus terminal. Haha. 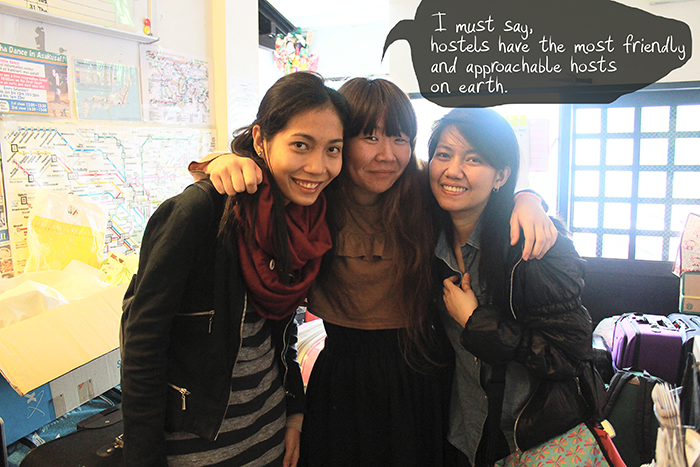 It was still an amazing night for me because… I was standing in the terminal line two steps away from a guy who really looked like Narimiya Hiroki. I was…sort of…fangirling so hard the entire evening. (*.*)v 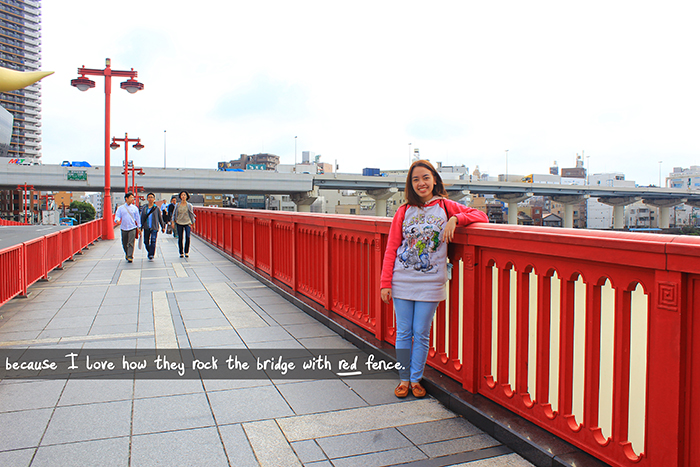 How about you. What are the things have you discovered in a place you visited that shocked you? Or have you ever lost your way while traveling? Let me know in the comments below. =D