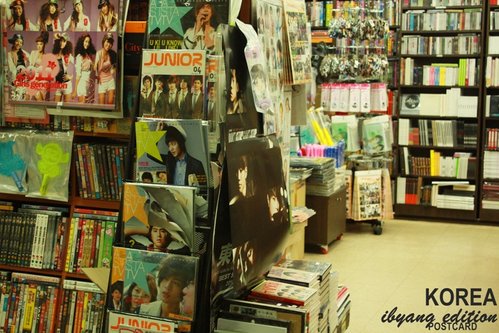 I am a self-confessed fan of K-pop and K-drama (if this is what you call someone who watches drama series in cable). Oh yes, I also confessed in the previous phlogs, I am also a fan of K-cuisine, K-flowers, K-urban, K-weather and everything with K-. =P

I was really happy to see this store in Myeongdong station. I never thought that I will be able to find this kind of store in a country where, as far as my observation with the Korea’s modernization is concern and this is my opinion only, idolizing celebrities is not rampant. Not until I knew the word “netizens” and im likely to be one of them, atleast for the time sake. I was asking the guy in the store for several dvd copies of dramas I really am fond of with a Korean accent (I was jumbling the words, haha). I got my precious Goo Hye Sun’s album for a price same as Philippines’ price. Mame bought an original soundtrack of Queen Seon Deok. If only I got few thousands more, I could have ended buying dvd of Boys Over Flowers.